Introducing the cover for Claimed By Power! Yay! I’m so excited! Many thanks to talented cover designer, Melody Simmons, who captured everything I was looking for, and more.

Not all angels are angelic…

Thea Robinson has never needed anyone’s charity. Sure, her impoverished existence isn’t desired by most, but her ability to manipulate people’s emotions helps her to blend into the shadows of an unforgiving city. When hideous creatures threaten her life, a surly but gorgeous stranger shows up revealing a world she didn’t know existed. She refuses to put up with his rude, arrogant attitude, but how do you dismiss a warrior angel? And does she really want to when his stormy gaze sends delicious thrills straight to her core?

Cam is one of the most ruthless Power angels in the fight against evil. His devotion to kill demons has made him a celebrated warrior in the Angel Realm, even though his motivation stems from grief. When he is assigned to train and protect a half-angel just coming into her abilities, his rage is unparalleled. Until he realizes Thea isn’t like any others. She stirs a carnal passion in him that he can’t shake. He never counted on her being so beautiful… so fierce… so most definitely his.

Claimed by Power is the first book in the Empire of Angels series, a paranormal alpha angel romance series. If you’re a fan of alpha heroes, powerful heroines, paranormal worlds and falling in love, Zoey Ellis’ riveting, sexy tale is perfect for you. 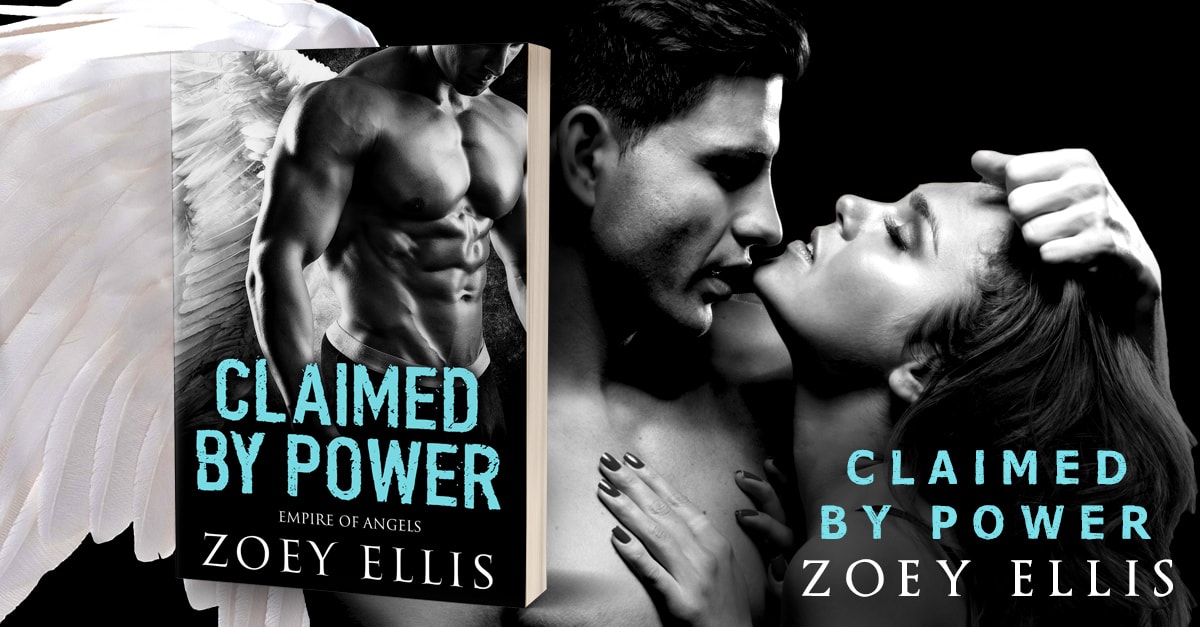 He continued to touch her, showing her every point, every part of the body she could hit and be most effective. He was slow and gentle, telling himself he didn’t want to hurt her, but really, he wanted more of her captivating scent and to just be close to her. Soon he was down on his knees, his hands on her legs to show her where she could kick while fighting to cause maximum pain to the demons. His hands brushed lightly over the spot just above her knees, then circled around back to touch the soft skin there.

It pleased him to discover that her body reacted to him. Her pulse increased under his fingertips, her legs shook, her breath huffed out in ragged spurts, and her scent deepened into a beautiful complex aroma.

It drove him to distraction. It took everything in his power not to slip his fingers over the waistband of her shorts and pull them down so he could extend his tongue into her folds and taste her pussy. He imagined how she would like that, how she might respond with her hands in his hair, her hips riding against his tongue. His cock ached and his back twitched with a desire to shift into his angel-form and beat his wings; to release his cock and plunge it into her. That was too much for him to think about.

After showing her the pressure points, he was almost drunk on her. He forced himself to stand so that they were face-to-face. Annoyed with himself, he vowed again to stay aloof and distant, no matter how hard it—or he—got.

He liked the sound of his name in her mouth, sure he would like other things in her mouth too.

“Thea,” she said, before he could criticize himself for the thought. She held out her hand.

“No one actually calls me Elithea.” She wrinkling her nose. “It’s a horrible name.”

She stared at him then lowered her eyes, a pink flush crept up her neck. Amusement threaded through him at her embarrassment—so she wasn’t all anger and smart remarks. Who knew Nephilim could be so adorable?

She cleared her throat, pulling her smooth hand from his. “What’s next?”

Come back for release week!

Claimed By Power goes live on April 3rd. Come back and visit to take part in the release giveaway and read more info about the book, including an author Q & A.

Hope to see you then!