A Savage Debt has had a bit of a quiet release week, but I couldn’t let it go by completely without announcing it on my blog!

So, I had a question about if I could write a fairytale-style story to release this year at some point. The idea was that it would be a fun, quick project, but as I started to think deeper about it, it turned into something much more distracting and weightier than I initially thought! There have been a lot of fairytale retellings lately, and I didn’t really want to do that, but I liked the idea of maybe a twist on Robin Hood–an anti-hero outlaw–while still including the usual princess and royalty that is familiar to most fairytales.

As the idea developed, I asked my Halos in my Facebook group whether it should be Omegaverse (the answer was an overwhelming yes!), and suggestions for the hero’s name. The names they came up with were great! Apart from finding the perfect name for the hero, Maddoc, I also ended up with a lot of other great names that fit the story (such as Ryden, Orick, and Allandis), and since this story wasn’t one that had been planned for a long time, it was a lot of fun to be able to flexible with a lot of it. (The heroine was named after the winner of a contest I ran last year. She chose the prize to have a character named after her in my next series, and was brave enough to ask for the heroine! Congratulations, Ana!)

So this has all resulted in the Beholden Duet, a brand new, two-part, Omegaverse romance set in a fantasy world with a fairytale feel. I loved building this world and getting to know the characters. The royal court and the Kingdom of Allandis was soooo much fun to construct. 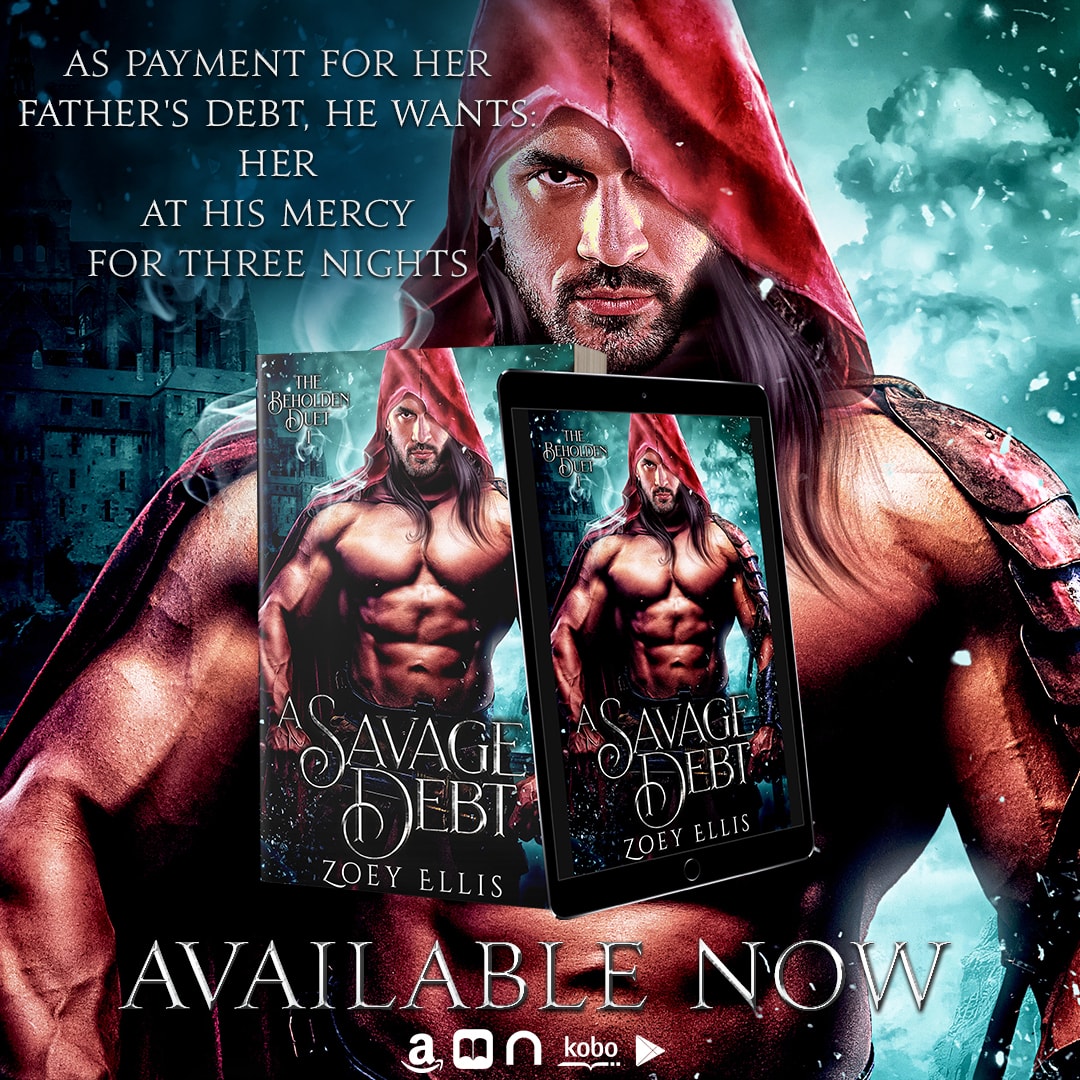 So what is this story about?

Outlaw Maddoc arrives at the palace asking for an audience with the king, who owes him a debt. He demands three nights with the Omega princess as his payment, which shocks and outrages the king and the royal assembly. Ana, who has been living a sheltered life, struggles to get her voice heard but always strives to meet her parents’ approval and expectations. She already has an idea of what her life will be and is comfortable with that. She views her upcoming arranged marriage to an Alpha in the royal assembly as the start of her independent life and feels she is prepared for it. However, when Maddoc arrives with his demand for her, she gets a brutal awakening about the life she thought she knew.

Excerpt of A Savage Debt

With those low, gritty words, the tremble exploded into a nauseous cloud of unease. Ana stepped toward him, unable to drag her eyes from his face. He watched her with the same intensity that he had watched Father, but there was something different about it now, something she couldn’t decipher.

When she reached within a couple of feet from him, she stopped and forced herself to bow her head. Maybe if she did what Milly said—didn’t speak to him unless necessary, and made herself to be the submissive Omega that all Alphas wanted—then she could save herself some of the discomfort that was no doubt about to come.

Ana’s eyes shot back up at him, but his expression didn’t change. Taking a deep breath, she slowly lowered to her knees, her dress puffing out around her. She kept her head down as he stepped forward, shuffling with his clothes.

When she glanced up, she froze, her breath caught in her throat. The outlaw had unbuckled himself and released his cock. Hard, thick, and long, it swayed heavily, almost as though it had a significant weight of its own. Though she’d had lessons about sex and her heat, she’d never imagined what a cock might look like close-up when aroused—of course she’d read the more racier stories in the library, the ones Milly thought she didn’t know about wedged between the boring land ownership laws and the thousands of recipes for pottage, but none of them described what a man’s appendage looked like, only what he did with it. This Alpha’s was huge—a thick, stiff rod that curved up slightly with a seeping bulbous tip, and veins scattering along it.

Her eyes widened as he came toward her, and she almost didn’t register what he was expecting her to do until its warm, wet tip touched her lips. She stiffened, indignant that he was intending to treat her like a whore, but she already knew that was going to happen. She forced herself to calm, and let him rub himself on her lips. The skin was silkier than she thought it was going to be, and the scent that curled into her nose was nothing like she had experienced before. Deep and rich, it was pungent with strong spicy, briny, and caustic tones blended to create something so uniquely complex she couldn’t decide if it was pleasing or not. She took a deep breath of it, and another. And then another.

“Open,” he ordered again, irritation crackling through his tone.

Ana tentatively opened her mouth, but immediately he grabbed the back of her head and shoved himself in as far as it would go.

She immediately retched, but he held it in, the tip almost touching the back of her throat as she tried to accommodate it.

He said something, but she couldn’t hear anything beyond her own choking. With her eyes tearing up, she grabbed his wrist that held her head down and scratched at it for him to release her.
Just when she thought she would certainly choke to death, he finally withdrew from the back of her throat but kept his cock in her mouth. Ana coughed around him,foaming bubbles of her saliva erupting from the corners of her mouth and dripping down to the floor in long, stringy strands.

Glancing up at his unchanged expression, Ana knew that he was not going to allow her to remove him from her mouth completely. So she sucked on him the best she could, her lips wet from her own spit and the bitterness from the back of her throat strong in her mouth. The taste of him echoed his complex scent, and she lowered her eyes to focus on that, trying to push aside thoughts of where his cock had been rumored to have been.

After a moment, he moved her head down on him, but before he got too far, pulled it back. He repeated this until it became a solid rhythm.

Ana tried to remember to breathe through her mouth but with him being so big, her primary concern was to make sure he didn’t push in too far again.

Finally, after what seemed like forever, he withdrew and pulled Ana’s head back, forcing her to look up at him.

His eyes remained intense and angry. “You haven’t had cock in your mouth before.”

Unsure if it was a question or a statement, Ana shook her head.

If you haven’t yet picked up your copy of A Savage Debt, it’s available now!

The second and final book, A Tainted Claim, is also available on preorder:

Ana is determined to put Maddoc behind her.

As she tries to take control of her life and make her own choices, one thing becomes clear.

Infuriated that she’s not already his, Maddoc uses all his resources to assert his claim.

I hope you enjoy this story! For more of my Omegaverse, check out my Myth of Omega world